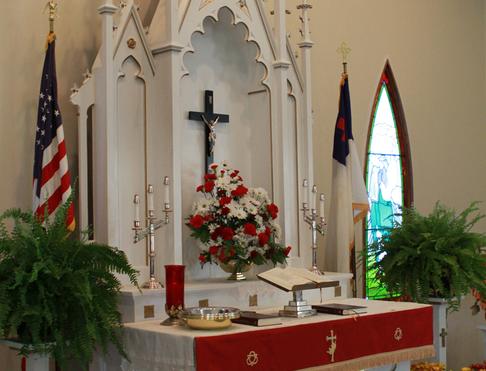 Welcome to Beautiful Savior Lutheran Church of Callaway, Minnesota.  Our church is a part of the Lutheran Church Missouri Synod; a “synod” means to walk together.  We walk together under a theme of “Touching Lives forever with the love of Jesus” through Word and sacrament ministry.  You are invited to come and grow with us as we reach out in love to the lost with a message of hope through our Lord Jesus Christ.  “As God’s chosen people, holy and dearly loved, clothe yourselves with compassion, kindness, humility, gentleness and patience…And over all these things put on love, which binds them all together…Let the peace of Christ rule in your hearts…Let the Word of Christ dwell in you richly…”Colossians 3:12-16

On May 23, 2010 Beautiful Savior Lutheran Church held its first special Voter’s Assembly with 70 members present to approve borrowing $75,000 from LCEF to finish enough of the work on Beautiful Savior to allow the congregation to move into the building.

On September 26, 2010 the first worship service in the new facilities at Beautiful Savior took place.  OnOctober 1, 2010 the first funeral took place at Beautiful Savior, as June Kaiser’s soul returned to our Lord.  OnOctober 10, 2010, we had a special dedication for Beautiful Savior Lutheran Church and also installed Rev. Del Stohs as the first pastor of the congregation.  The first baptism for the new congregation was on October 17, 2010 for Macie Lynn Vanderplaats, daughter of Jeremy and Rachel.  The first wedding in our new facility was conducted on October 15, 2011 for Jesica Anderson and Matt Smith.  The first confirmation class under the name of Beautiful Savior Lutheran was held at the former Immanuel church facility on April 25, 2010 for Cole Robert Arthur Groth and Dallas Arthur LaNoue.   On Palm Sunday, April 17, 2011, the first class to be confirmed in our new facility of Beautiful Savior was Aaron Felker, Abby Roggenkamp, Tate Voss, and Ryan Weber.

With God’s help, the congregation is looking for ways to reach out to their community.  Their visionary goals include establishing a youth committee, a music/worship committee, church leadership training, establishing new Bible studies, and encouraging participation in Mary & Martha and Men’s Club.